Santorini/Thera and Anafi are the most southerly of the Cycladic islands. They are 134 nautical miles away from Piraeus and 68 miles from the port of Heraklion (Crete). 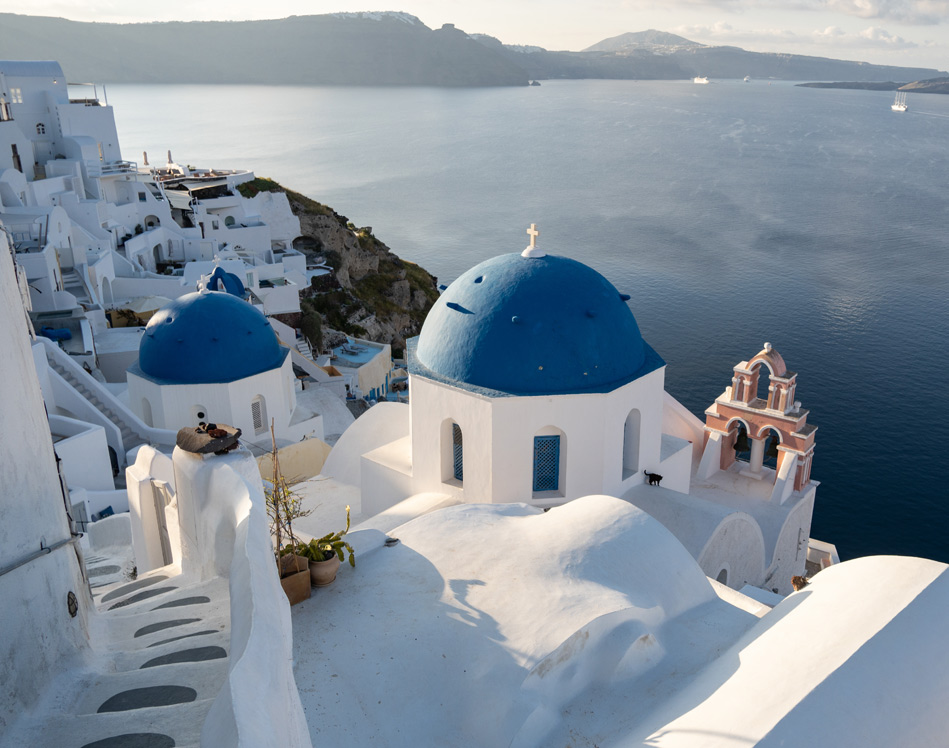 The islands’ culture has evolved significantly since antiquity, due to its strategic position as a maritime communications location between Crete and mainland Greece and the volcanic activity which shaped the land.

The island used to be called ‘Strogili’ (round) due to its shape, short after the immense volcanic eruption of the 17th Century BC, the central section of the island sunk which created the breath-taking Caldera. The current land is flat and dry with the highest peak called Prophet Elias (567 metres). The coasts, especially on the eastern side, are extremely smooth with no intense fragmentation, shaping beautiful beaches.

The landscape of Thira, along with the archaeological sites and the unique architecture of its settlements, make it an exceptional geological and environmental phenomenon and one of the most popular destinations for tourists globally.

Prehistory to the Byzantine period: The Akrotiri settlement, which flourished during the first half of the 2nd millennium BC, is the main and richest source of information on the civilization of Prehistoric Thira. The area got inhabited by the Late Neolithic (5th millennium BC) and the Early Bronze Age (3rd millennium BC). In the midst of the Cycladic period, close relationships were being developed between the Minoan Empire and Ipeiros, where the settlement turned into a cultural, economic, commercial and artistic centre of the Aegean that reached its peak during the late Cycladic I period.

The volcanic eruption (approx. 1650 BC) completely destroyed the settlement, covering the remains of this important cultural centre under thick ash.

After the island’s abandonment for 2-3 centuries, the island got populated again during the Mycenaean period (Monolithos peak). Phoenicians settled on the island in the 13th century (BC.) and named it ‘Kallisti’. In the late 12th Century the island got colonized by the Lacedaemonians using Thera as their headquarters. This is where the name of the island originated from.

In the ancient years, the centre of the island was located on the east coast on a mountain called ‘Mesa Vounos’. This is where the city of Thera was develop and populated from the Geometric to the Late Roman period (9th-13th Century BC). In the 6th Century BC Thera made its own currency and allied with Sparta during the Peloponnesian war. During the Hellenistic period, the island was fully developed and used as the naval and military base of the Ptolemies.

From the Byzantine to the Latin rule: From the 4th Century AD, during the Byzantine rule, the island embraced Christianity and established the Diocese of Thira. After the 9th Century, Thira got involved in the Aegean issue and Alexios I Komnenos (1081-1118) founded the church of Panagia Episkopi in Gonia, in the center of the island.

After the fall of Constantinople by the Franks (1204), Thira became one of the four seats of the Latin Dioceses of the Duke of the Aegean and along with Thirasia it was granted to Baron Iakovos Varotsis until 1335. At that time he was placed under the rule of Nikolaos Sanoudos, the Duke of Naxos (the capital of the Latin state).

It was under the Latin rule that the island was named Santorini, taken from the church of Santa Irene, which they had built. The following years until 1487, the island was reigned by different rulers from the Frankish families of Sanjo, Crispi and Pizani. In 1487 the island was commandeered with the Aegean Duke in Venice. During the Frank rule, pirates destroyed the economic, demographic and social life of the island, however, during the same period some of the inhabitants embraced the dogma of the Catholic faith.

The Ottoman Empire and the modern times:

In 1537 Santorini was raided by Haireddin Barbarossa and fell under the Ottoman rule in 1566. The locals had been given privileges which helped flourish trade, shipping and transformed the island into a strong centre with a dynamic fleet and relations with the great harbour of the time (Alexandria, Constatinople).

In 1830 the island became an establishment of the Greek state, where trade and shipping were the main areas of development, highlighting the island’s and its inhabitant’s economic independence. In 1941, Santorini joined the Italian administration as part of the occupation of the Greek territories by the Axis Powers.
After the Italian defeat in 1943, the island was under German occupation until its liberation. An important historical fact was the devastating earthquake of 1956, which led to the abandonment of the island by a large part of the population.