Greek churches are an integral part of Greek history and Christianity. Many of the churches are distinguished for their unique decoration and architecture which make them unique and essential to visit.

Below is a list of churches that are worth visiting in Santorini. 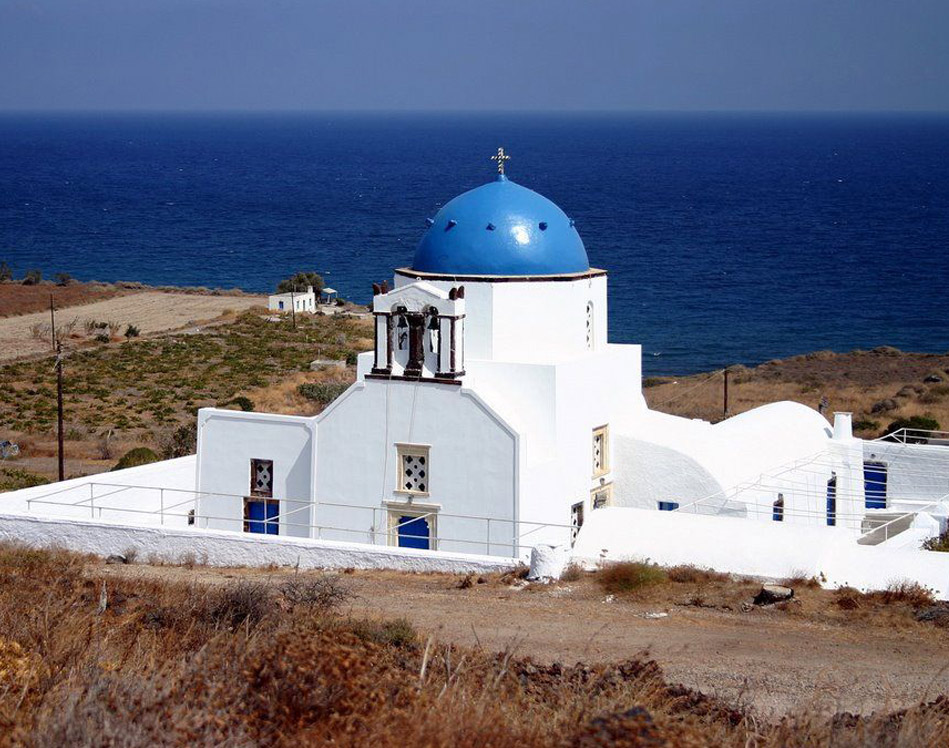 Is located on the road towards Oia. The eruption of the Kouloubo volcano in 1650 (also known as ‘The Great Evil’) had a high rate of deaths. In order to show appreciation of this tragedy ending, locals built a chapel called ‘Panagia tou Kalou’.

‘Piskopi’, ‘Kira Piskopi’ or ‘Episkopi Gonia’ are all the known names for this chapel. The church was built in the 11th Century by Alexios I Kommenos. The most important icon in the church is the ‘Panagia Glikofilousa’ and on the top of the entrance to the chapel you will see the picture of the Emperor Alexi.

On March 6th 1711, the Bishop of Thira Zacharias Gizis, gifted two chapels to his brother monks Gabriel and Joachim Bellonia, in order to establish the monastery of Prophet Elia.
The two temples were at an altitude of 567 metres above sea level. The Priest Gabriel Bellonia recognized the monastery as Patriarchal. The two monks attempted to rebuild the monastery but due to lack of resources it was not completed. In 1852 when King Otto visited the island, he provided the ministry of ecclesiastics with the sum of 17,000 drachmas to complete monastery.

This Chapel was built in 1835 by Gerasimos Baila who owned the land. Based on a dream he saw, he decided to conduct an excavation in order to find the old temple and the holy cross, which he did. During the excavation, it is said the workers were thirsty, but there was no water available. The Bishop came and did a sanctification to fill the well with water and it is said that the well filled with water. After the excavations were completed, the current chapel was built in the same area by the architect Ioannis Saliveros Batzanis.

Founded on 6th December 1651, and built between Imerovigli and Firostefani. Mihelakis Gizis turned it into a women’s monastery for the salvation of his soul. The first nuns in this monastery were the Gizis sisters. Due to the unsafe location of the chapel, inhabitants decided to relocate and so did the nuns. They built a new monastery between Fira and Imerovigli where there was a small temple that already existed there ‘Zoodohou Pigie’. The guardianship was assigned by the Patriarch Cyril to Neophytos Gizis. The Construction of the monastery was completed in 1820, but it was only recognized by the Supreme Court in 1849.

Church of Agios Ioannis of Mylonades

Is an underground Byzantine chapel with icons and frescoes with Byzantine influence. It is located on the eastern side of the island, in the area of ​​Vourvoulos and on the 26th September there is a religious festival based on the Byzantine calendar. The myth says that a princess and her escort is buried there, as they sailed off the island, a severe illness drew death on the boat. The icons of Agios Ioannis (Saint John) portraying him as an old man with a beard, certifies that the chapel was Byzantine.

Metropolis of the Orthodox of the island

It was founded by Marco Bellonia of Thira, a great merchant, Catholic, from Orthodox parents. He travelled to Venice, Italy where he bought and brought back to Santorini the image of the Lord Jesus Christ, who originally came from the Church of Hagia Sophia in Constantinople (the icon is now in the Metropolitan Church).

There was a small temple of Ypapanti, which was the metropolitan temple of the island. Due to the increasing population of Fira, it was decided to demolish it and construct it from the beginning, with the guidance of the priest-martyr Mark Bellonia.

The construction began in 1827 and was delivered in 1888 by his episcopate and owner, housekeeper Neophytos Christodoulou Bellonia, through his covenant.

A stone-built church with two cymbals on each side of the dome.

The magnificent temple suffered great damage in the 1956 earthquake and in its current position today, the church was founded in 19/1/1963, influenced by the designs of G. Nomikos.